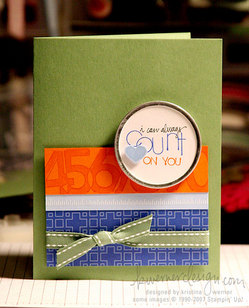 I like this card because it’s not really just masculine or just feminine. I dig that. :)

Also, who knew that Stampin’ Up!’s ABC Lower Alphabet set would go so well with the retired Straight Up Alphabet & Numbers? It’s awesome, that’s what I say.

Although, I wish alphabet stamps were easier, ya know? Not so unpredictable. Granted, all stamps are somewhat unpredictable, but alphas are especially unpredictable. I mean, they’re so little! And it’s just hard to judge where it’s going. Plus, sometimes a girl is too lazy to dig out her Stamp-a-ma-jig from underneath the PILES of crap stuff on her craft desk. Oh, well!

But HOLY CRAP, Batman! Don’t you love the colors in Jersey Shore papers? I {heart} these papers a bit too much. :)

Who else loves orange? Roll call!